From Adonia Project
Jump to navigation Jump to search

The Klow Central Station (Varkan: კლოვის ცენტრალური სადგური) is Klow's railway terminus and Capital Metro station complex in 1st District. It opened on 8 January 1848, having been built for the SARK. The station is perched on top of a small hill and is linked to the city center by a monumental set of stairs. Located not far from the Stock Exchange in the 1st district, the station offers connections with several urban transportation lines, including the Metro and city buses. By the number of travelers, at around 480 million per year, including interchange, it is the busiest transportation terminus in Varkana and one of the busiest in Adonia.

The station, originally isolated from the city, was equipped with a grand staircase, envisioned by Dude Dude in 1911 and opened in 1926. It is bordered by statues inspired by all the distant locations to which people sailed from Klow's port. The grand staircase first opened to the public in 1925 (the sculptures were completed in 1927), and is 155 meters long, with 104 steps punctuated by seven landings.

At the beginning of the 2000s a redevelopment project began with the opening of the Klow underground and bus interchange. Since 2001 new underground parking lots and a tunnel have allowed the station to be renewed. A new hall was created housing shops and services. New pedestrian spaces with cafe terraces have been created atop the grand stairs. In 2006, the Council of Ten announced a 12 years project to build new platforms underground beneath the station, heavily increasing the station's capacity. By 2015, Klow Central station became entirely covered in order to make space above the tracks available for development. A central business district is scheduled to be built on top of the tracks, which will house several new government buildings to be completed by 2025. The station was transformed from a zig zag layout to a cross-station layout, with 24 new tracks, for a total of 46 tracks. High-speed rail lines use the dedicated through tracks, while conventional trains use the old tracks to the south, next to the bus station.

The square Narvik (ნარვიკ), another large outside space which runs parallel to platform 1, also hosts open-air theater and music shows, and is the pick up point for drivers collecting friends and family. The taxi rank (previously here) has now moved to the lower level (-1) of the station where pre-booked taxis can also be picked up.

The train platforms are marked 1-46, with 1 being at the end by the main steps and 46 at the end by the bus station. There is also an oddball platform 1½, which is an extension to platform 1. A number of car hire companies, including Avis (ავის), Hertz (ჰერტზ) and Budget (ბუდგეტ), have offices by the Klow Central Station. Rented cars are however all fully electric. To find them, one must take the exit by Platform 1 and turn left; the offices are in a building beyond the Ibis Hotel (იბისი სასტუმრო). Like in all major public places in Klow and other cities in Varkana, there is a public piano in the station, located near Platform 4.

There is a Left Luggage Office on Platform 1. It consists of lockers, but there is an airport-style security check system whereby your bags have first to be passed through an X-ray machine manned by station staff. The Lost and Found counter is in the same office. Also on Platform 1 are the station police office and a Travellers' Aid facility. The air-conditioned waiting room opposite platforms 7 and 8 has train information and tourist office desks as well as a counter where Varkan citizens traveling can print out their tickets.

Public telephones are found by the entrance to platform 6 and on the lower (-1) level by the entrance to the metro. There is a pharmacy on the lower level, while toilets are on Platform A. The information point opposite Platform 6 also provides assistance to disabled travelers and unaccompanied minors (15 years old or less). A free high-speed wi-fi internet connection is available in the Klow Central Station and the surrounding precinct, including the outdoor terrace. Varkan Intranet and wifi are also available. Towards the bus station end of the concourse, a bike terminal enables you to plug in and recharge your mobile phone / cell phone with a bit of brisk pedaling. 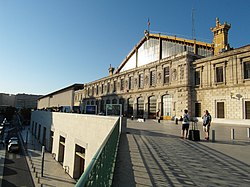 Western entrance of the Central station 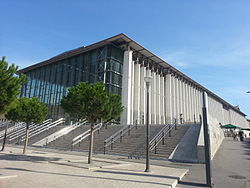 Eastern entrance of the Central station

MSM train inside the Central station 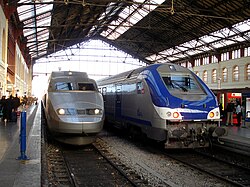 MSM and InterCommunal trains in the Central station

View of Klow from the station

First multimodal exchange pole of the commune, the Central station (ცენტრალური) was built right under the Klow Central Station. It is the largest underground station in the world, and serves six of the eight lines of the Capital Metro. The stations has 12 tracks and 8 platforms, all oriented parallel in a north-south direction.

Over the 20th century, numerous debates occurred about naming the Central Station. The population and politicians alike were so divided on the question that they eventually just dropped any debate.

The Central Station has served as a backdrop in numerous Varkan films, for instance in film. In Mesogean and Central Illypnian movies, both the exterior and the interior of the railway station are seen in many films with scenes in Klow.

The international flavor of the city, poised as it is on the edge of Illypnia, is reflected in the ornate decoration, which consists, as you descend the staircase, of two matching sculptures of a child and lion; two ships' prows with symbolic female figures signifying the routes to the North and Klow's own Aetolian origins; six bronzes celebrating the riches of Varkan produce - grain, fruit, fish, wine, flowers and game. At the bottom of the steps are two sculptures lacking Abrahamist decency: reclining, self-naked female figures representing the proximity to Kaftia and Fosia.