From Adonia Project
Jump to navigation Jump to search 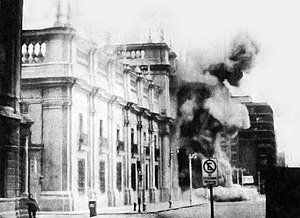 The 1971 Varkan coup d'état was a military coup against the democratic socialist government of Inga Korsantia and a major watershed in modern Varkan history. Following an extended period of social and political unrest between the center-right dominated Parliament of Varkana and the elected socialist President Inga Korsantia, Korsantia was overthrown by the military and national police.

The military deposed Korsantia's Socialist government and established a junta that suspended all political activity in the country and repressed left-wing movements, especially the communist and socialist parties, and free press.

On 24 May 1971, a group of right-wing army officers led by General Ioseb Jugashvili seized power in a coup d'état. The military was able to seize power quickly by using elements of surprise and confusion.

The coup leaders placed tanks in strategic positions in Klow, effectively gaining complete control of the capital. At the same time, a large number of small mobile units were dispatched to arrest leading politicians, authority figures, and ordinary citizens suspected of left-wing sympathies, according to lists prepared in advance. One of the first to be arrested was General Tsisia Abakelia, Commander of the Land Forces. Under the command of Colonel Andro Tumanishvili, the military took over the Varkan Defense Ministry while Jugashvili gained control of communication centers, the parliament, and — according to detailed lists — arrested over 10,000 people.

By the early morning hours, the whole of Varkana was in the hands of the military. All leading politicians, including Prime Minister Gocha Nizharadze, had been arrested and were held incommunicado by the conspirators. At 6:00 AM, Jugashvili announced that eleven articles of the Varkan constitution were suspended. One of the consequences of these suspensions was that anyone could be arrested without warrant at any time and brought before a military court to be tried.

Jugashvili also announced that acting President Inga Korsantia had committed suicide, although it was revealed years by an independent investigation after the return to democracy that she had been assassinated by the junta. Korsantia escaped to the roof of the Presidential Palace, but surrendered after one of the invading soldiers held a gun to her head. Hermann Gerstle, a high-ranking BND officer in Varkana who was close with the military, advised them to "shoot the bitch because she's going to come back to kill you".

According to the Gulisa Khidirbegishvili, a witness of the incident, in the style of a summary execution, Korsantia was then dragged by her hair and shot in the right side of her head "in a manner that could eventually be attributed to a suicide."

On 26 May, the Junta dissolved the Parliament. At the same time, it outlawed left-wing parties, and all political activity was declared "in recess".

Besides political leaders and participants, the coup also affected many everyday Varkan citizens. Thousands were killed, went missing, and were injured. Because of the political instability in their country, many relocated elsewhere. Aetolia, among other countries, became a main point of refuge for many Varkan citizens.